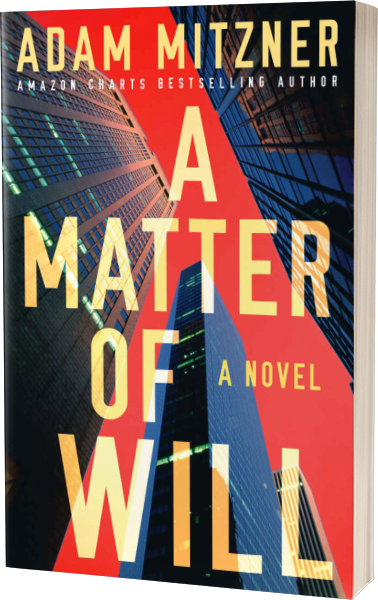 A Matter of Will

Success becomes dangerously seductive for this Wall Street broker in a dizzying thriller by the author of the Amazon Charts bestseller Dead Certain.

Will Matthews came to Wall Street with hopes and dreams of hitting it big. But things have not been going as expected. He’s on the verge of being fired when he meets the devilishly mysterious and fabulously wealthy Sam Abaddon.

Winning Sam’s business answers Will’s prayers, catapulting the young stockbroker into the privileged world of money and luxury. Not only that, but Will also has met his dream girl, ambitious attorney Gwen Lipton.

All at once, it seems as if Will’s life couldn’t get any better.

When Will witnesses a shocking act of violence, his charmed new existence is revealed to be a waking nightmare as the truth about his benefactor—and his own complicity in criminal conduct—becomes devastatingly clear. As the noose draws tighter, Will faces an impossible choice: feast upon the poisonous fruit of his bloody business or defy his patron and face dire consequences.

Business, blood, and deception help make this an exciting and fast-moving yarn. Fine fare for thriller fans.
—Kirkus Reviews
The action never flags in this exciting cautionary tale.
—Publisher’s Weekly
Mitzner is a master at making the complex understandable for the average reader while not letting the intricate details of the subject matter that supports his story weigh it down.
—Bookreporter
Mitzner really knows how to craft a page-turning mystery. A cover-to-cover read.
—Press & Guide

Will Matthews had never seen a dead body. Not even his parents’ bodies—he’d chosen not to view them before their burials, knowing that witnessing them that way would haunt him. But now he was staring straight into the lifeless eyes of a corpse lying in a pool of blood on his balcony.

A part of him couldn’t make sense of it. As if it were a movie, the ending of which had veered unexpectedly away from the foreshadowed climax, he wanted to press the rewind button and watch the last few minutes unfold again to see what he’d missed.

Of course, if he had a rewind button for life, he would have pressed it sooner than now. Maybe when he first met Samuel Abaddon. Even earlier than that, truth be told.

What filled Will with even greater panic than the sight of the dead body was the knowledge that this wasn’t the end of his story. Far from it. There were choices to be made, and the resolution was still uncertain.

Most terrifying of all, Will couldn’t discern whether he should write himself as the hero or the villain in his own autobiography. He had a feeling that the decision he was about to make would set him irrevocably down one path or the other.

The one thing—maybe the only thing—he knew for certain was that once he made his choice, there would be no turning back.