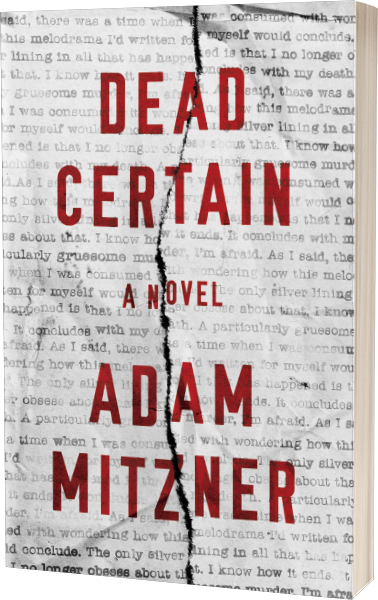 An Amazon Charts Most Read and Most Sold book

By day, Ella works as a buttoned-up attorney on some of the city’s most grueling cases. By night, she pursues her passion for singing in the darkest clubs of Manhattan.

No one knows her secret, not even Charlotte, the younger sister she practically raised. But it seems she’s not the only one in the family with something to hide. When Charlotte announces she’s sold her first novel, Ella couldn’t be more thrilled…until she gets a call that her sister’s gone missing.

Ella starts investigating with the help of Detective Gabriel Velasquez, an old flame in the NYPD, and what she finds is shocking. If art imitates life, then her sister’s novel may contain details of her real-life affairs. And any one of her lovers could be involved in her disappearance.

Desperate to bring Charlotte home, Ella works through her list of suspects, matching fictitious characters with flesh-and-blood men. But will it be too late to save the sister she only thought she knew?

[Dead Certain’s] leading coincidence, which is quite a whopper, is offset by an equally dazzling surprise…It packs enough of a punch to make it worth reading.
—Kirkus Reviews
There are several twists and turns along the way…creating a big amount of tension…
—The Parkersburg News and Sentinel
Dead Certain is dead-on terrific.…It’s an entertaining and riveting work that will more than hold your interest.
—Bookreporter
Consistently compelling… Adam Mitzner is a master of the mystery genre.
—Midwest Book Review

For someone who fancies herself a writer, Charlotte’s texts are extremely heavy on exclamation points.

I text back, wat—no question mark. My sister and I have used this shorthand since texting began, even though it’s actually more difficult because my phone autocorrects to what, and then I have to manually change it back.

That it’s the middle of a workday didn’t seem to enter Charlotte’s consciousness. Nor did the fact that she’s asking me to go to 112th and Broadway, a few blocks from her apartment. She undoubtedly knows that I’m in my office in Midtown, at Fifty-Seventh and Madison. In other words, a two-minute walk for her and a forty-minute commute for me. But my sister and I long ago established that when she asks me to come to her, I come, no questions asked. One of the privileges of being the baby, I suppose.

KK. We always text that too, even though that autocorrects to OK, and then I change it back.

On my subway ride to the Upper West Side, I consider the possibilities regarding my sister’s news. Given that we are both of that age, marriage is always what I suspect by default when a single friend says she has news, or a baby if she’s already wed. Charlotte is unmarried and enough of a traditionalist that I reject pregnancy in favor of nuptials. I know I should be happy for her if that is her big reveal, but I hope to God it’s something else. Not because Charlotte is six years younger than I am and I don’t even have a boyfriend—it’s because I’m not a fan of her current beau, Zach.

Zach is the kind of guy you date in your twenties because he’s beautiful and damaged and you think you can change him. The problem is that when you reach your thirties, you realize he’s not always going to be beautiful, you’re never going to change him, and being with him has already damaged you so profoundly that you can’t even imagine the wreck you’ll be if you remain together even one more day, much less ’til death do you part.

When Charlotte and I last discussed Zach—which was only a few weeks ago—she seemed ready to end it, so I doubt that she’s suddenly decided to marry him. Then again, stranger things have happened after a man proposes. And Charlotte is nothing if not a romantic in that way.

The next possibility my mind runs to is that Charlotte’s news might be employment related. But here there really couldn’t be much for her to say. She just finished her first year of a two-year MFA program in creative writing at NYU—all on our dad’s nickel. I couldn’t imagine her giving up that cushy life for an entry-level job anytime soon.

It isn’t until I’m coming up from the subway at 110th and Broadway that I consider the possibility that her news might not be good. Could she want to tell me that she’s got some health issue? That she’s pregnant and doesn’t know what to do?

I shake off the idea that it could be negative. Bad news doesn’t come with three exclamation points.