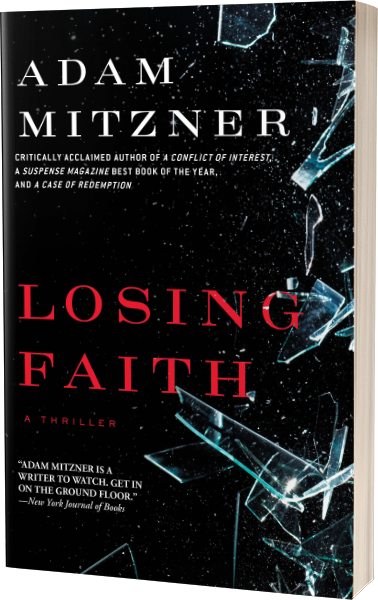 From the acclaimed author Publishers Weekly called “a gifted writer” comes this nail-biting legal thriller in the bestselling tradition of John Grisham and Scott Turow.

Aaron Littman, the chairman of one of the country’s most prestigious law firms, has just been contacted by a high-profile defense attorney, whose client is Nicolai Garkov—a Russian businessman widely believed to have pulled the financial strings behind a recent terrorist bombing. Aaron suspects Garkov is looking to switch representation, as he’s willing to pay one hundred thousand dollars just to take a meeting, but Garkov has blackmail on his mind.

Armed with damning evidence that the presiding judge, Faith Nichols, had a torrid affair with Aaron during another recent case, Garkov threatens to destroy Aaron’s career unless he influences Faith. Filled with suspense, twists, and turns, Losing Faith will captivate legal thriller fans everywhere.

Tightly plotted, fast-paced….Startling….A worthy courtroom yarn that fans of Grisham and Turow will enjoy.
—Kirkus Reviews
Mitzner sustains interest with complex plotting and effectively uses his own background as a defense attorney to add color.
—Publishers Weekly
Even while keeping us glued to the final outcome of the case, he reminds us that justice is, at bottom, the interplay of people with ideals, drives, skills, faults, and fears.
—Washington Independent Review of Books
A new courtroom thriller that gives us an all too realistic view of how quickly someone at the top of his game can fall with one wrong decision…
—Jacquo Lifestyle Magazine
With human characters, perfectly timed twists and unexpected stunners, Losing Faith evolves into an intense emotional drama. More and more difficult to put down, it’s great entertainment!
—themysterysite.com

Sam Rosenthal’s tone suggests he’s talking about much more than the topic at hand. It’s as if he’s addressing something innate about Aaron Littman himself.

Aaron smiles, and in that gesture, he belies Rosenthal’s claim. In fact, if anyone seems completely right, it is Aaron Littman. A year past fifty, he’s six foot two and not more than ten pounds heavier than when he was an All-American swimmer at Harvard. A strong jaw, piercing blue eyes, and thick, jet-black hair dusted with gray around the temples in exactly the spots you’d place gray hairs, if given the choice, complete the package.

Samuel Rosenthal is almost comically the opposite. He’s more than a half foot shorter than Aaron, he doesn’t have a single hair on his head, and his right side droops slightly, the last vestige of the accident that nearly killed him a decade ago. Yet Rosenthal is the personification of the expression that you shouldn’t judge a book by its cover. At seventy-one, he’s still a wartime consigliere of the first order. The type of lawyer who takes no prisoners and leaves no earth unscorched.

They met a quarter century before, the year Aaron clerked on the United States Supreme Court. Rosenthal had argued a case—it embarrasses Aaron that he can never remember which one, only that it wasn’t a case that Justice Rellington had assigned to him to work on—and after the argument, Rosenthal came back to chambers.

“This is the young man I’ve been telling you about, Sam,” Justice Rellington said. “Aaron Littman, meet Sam Rosenthal.”

Aaron had heard of Rosenthal, of course. Back then, you couldn’t be a law student without having heard of the great Samuel Rosenthal. Protector of the First Amendment. Confidant to power. Mr. Fix-it. A lot of other nicknames too. Before speed dial existed, those at the top of their field, any field, knew Rosenthal’s phone number by heart.

“It’s nice to meet you, Mr. Rosenthal,” Aaron said, looking down at the top of Rosenthal’s bald head. Little did Aaron know that he’d revisit that view a million times in the years to come.

“I suspect you two have a lot to talk about,” Justice Rellington said. “I’ll catch up with you later, Sam. And, Aaron, listen to what this man has to say—because the president does.”

As soon as the door closed, Rosenthal said, “One of the things you learn when people pay you three hundred bucks an hour is that you need to get right to the point. So that’s what I’m going to do. I’m here because I want you to come work with me at Cromwell Altman Rosenthal and White.”

“I’m flattered . . . but I’ve already accepted a position at Yale. And please, Mr.— Sam, don’t take this the wrong way, but I just don’t see myself devoting my life to representing huge corporations and criminals.”

Rosenthal laughed. “Is that what you think being a partner at Cromwell Altman Rosenthal and White is all about?”

Aaron didn’t respond, making his answer quite clear. He most certainly did.

“Because I respect you, Aaron, I’m not going to tell you that we don’t represent our fair share of giant corporations and criminals, but being a partner at Cromwell Altman is about much more than that. It’s . . . let me put it this way. You wouldn’t say that Justice Rellington’s job is to interpret statutes, correct? His job is to shape the law in ways that will stand twenty, fifty, a hundred years or more from now. That’s what being a partner at Cromwell Altman is about too. In a word: power.” Rosenthal’s expression turned even more serious. “The simple truth of the matter, Aaron, is that while I have little doubt that you would be great as a professor of law, the question you need to ask yourself is whether you want to make a difference in the law . . . or merely teach about others who make that difference.”

The rest, as they say, is history.

In the years that followed, Aaron climbed the ranks at Cromwell Altman. At first that meant learning the trade at Rosenthal’s side, then as a partner ready to assume the mantle of leadership. That transition happened earlier than either of them had expected, when Rosenthal was nearly killed in a car accident from which he emerged broken on his right side. It was in that crisis, however, that Aaron showed he was a worthy successor to the throne. When Rosenthal had returned to the firm after a six months’ absence, Aaron offered to step aside, but Rosenthal wouldn’t hear of it.

“The whole point, Aaron,” Rosenthal told him at the time, “is that we’re building something here that’s bigger than any one person. Cromwell Altman is the monument to our time on earth.”

Today, that monument comprises more than six hundred lawyers, who occupy seventeen contiguous floors at the top of a fifty-seven-story tower sheathed entirely in glass. On sixteen of those floors, there are seven offices on the northern exposure—two partner offices on the corners (each with six coveted windows), three associate offices on either side of them (two windows), and then a smaller partner office in the middle of the hall (three windows). On the northern exposure of the fifty-seventh floor, however, it’s just Aaron and Rosenthal, their offices separated by a conference room, which is not accessible to anyone but them.

They meet in that conference room most mornings before eight. The space is dominated by a long, white marble table, around which sit twenty-two high-backed, black leather chairs, ten on each side and one at each head. The northern exposure is all windows, looking out onto Central Park, with a view stretching well past the park’s northernmost point.

When it’s just the two of them, they always sit catty-corner on one end, Aaron at the head and Rosenthal beside him. Usually they engage in the kind of breakfast chatter most men share with their wives before heading off to work—something of note that was in the morning news or the outcome of last night’s game.

Today’s topic is far more serious, however. It’s about control of the firm that Sam Rosenthal and Aaron Littman have ruled since the Reagan administration.

“Sam, there’s just no way Pierce gets four votes,” Aaron says with confidence, even though Rosenthal has just told him that assessment is wrong.

Donald Pierce, the head of the firm’s corporate department, fancies himself as the man who would be king. To achieve his coup, Pierce needs the support of four out of seven members of the firm’s management committee—the Orwellian-named Committee on Committees.

Rosenthal shakes his head. “Say what you want about Pierce, but he’s not stupid. He wouldn’t be so open in the challenge if he didn’t already have four votes.”

“From who? Maybe Goldman is with him . . . but that’s it. Abby, you, and me are solid. Jane thinks Pierce is a pompous ass, and Elliot Dalton is going to do whatever causes the least disruption. I mean, at his age, a civil war is the last thing Dalton wants.”

Aaron’s confidence does nothing to assuage Rosenthal’s concern. His expression—a furrowed brow and tight jawline—doesn’t relax in the least; if anything, Rosenthal appears even more alarmed that Aaron does not recognize the seriousness of the situation.

Rosenthal walks unsteadily to the window. He usually relies on a cane—a dark hickory stick with a mother-of-pearl handle—to provide balance, but when he meets with Aaron, which he does two or three times a day, for some reason he always prefers to limp.

Rosenthal takes a few moments to bask in the expanse of Central Park fifty-seven stories below him. At this height, it’s easy to feel like a god, capable of controlling the world below as if it were actually composed of things as small as they appear. It’s also easy to assume that being this high up makes you invulnerable to attack.

When Rosenthal turns around, his expression conveys greater worry than words ever could. It’s apparent that he sees danger fast approaching.

Like most litigators of the first order, Rosenthal is predisposed toward pessimism. When your professional life is defined by trying to protect people from bad things, you realize how easily things can go bad. But Aaron knows better than to dismiss Rosenthal’s concerns, because in those rare instances when Aaron and his mentor haven’t seen eye to eye, Rosenthal has usually been right.

And so, despite Aaron’s outward optimism that the COC still supports him, he is acutely aware that if Samuel Rosenthal believes Donald Pierce has four votes, he very well may have them.