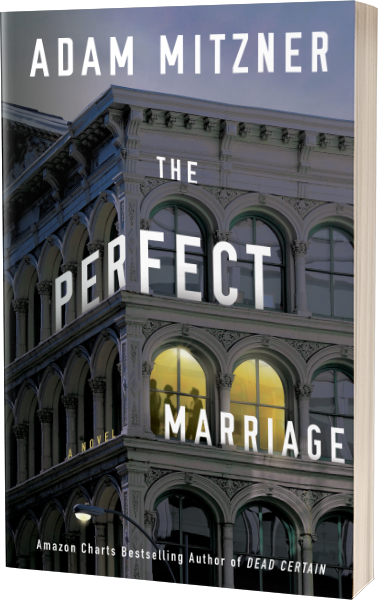 The price of true love is betrayal, suspicion, and murder in a thriller of twisting suspense by the Amazon Charts bestselling author of The Best Friend.

James and Jessica Sommers are celebrating their first blissful year together, an unexpected second chance at true love. Unfortunately, their newfound shot at happiness is not without collateral damage.

There’s Jessica’s ex-husband. He pretends for all the world that he’s resilient and strong. If only for the sake of their teenage son, profoundly vulnerable in his own way. James’s ex has taken a different road. Bitter, vengeful, and threatening, she wants only the worst for the happy couple. And then there’s the couple themselves: Are they truly as in love as they seem?

When James enters into an extraordinarily profitable, if shady, transaction with a beautiful art dealer, Jessica and James’s seemingly perfect marriage takes a dark and tragic turn.

Amid suspicions, tested loyalties, revenge, and guilt, no one escapes unscathed from sins committed in the name of love.

Delivers all the guilty pleasures the title promises.
—Kirkus Reviews
Fans of clever police procedurals will be satisfied.
—Publishers Weekly
Does the concept of a perfect marriage actually exist? We may never know, but Mitzner certainly lays claim to the perfect murder being realized.
—Bookreporter

Owen had always assumed that the first funeral he would attend would be his own. Such a morbid thought would have been foreign to most teenagers, who invariably believed they were immortal. Owen’s classmates were forever testing the thesis—driving while drunk, taking drugs of dubious origin, and vaping anything. They always lived to tell the tale, proving they’d been right all along: they could never die.

For Owen, however, there was no tempting fate in this way. Before he was old enough to grasp the indestructibility that other teenagers believed to be their birthright, Death had entered his inner circle. Once admitted, Death remained front and center in Owen’s thoughts. So much so that Owen eventually thought of Death as a friend—a confidant. Someone who listened to him when no else did.

Everyone else in his life was always talking—about how it was all going to be okay, how brave or strong he was, or what a fighter he was. Even at thirteen, Owen knew it was a pack of lies. No one could predict whether he would live or die. He wasn’t strong or brave or a fighter. In fact, some days he felt so weak that he couldn’t get out of bed. He lived in a state of constant terror. More often than not, rather than fighting it, he succumbed to that dread.

Every time he did, Owen realized the one central fact of his existence: everyone was always lying to him.

Death spoke the truth, whether Owen wanted to hear it or not. Death had no interest in Owen’s feelings, in keeping his spirits high, or in stopping his mother’s tears. Death didn’t give two shits if he was having a good day, if it was his birthday or Christmas, or if he was up to handling bad news.

Death’s only allegiance was to the truth.

What Death told Owen was simple: It had not chosen him because he was special or he could handle it or it would build his character. Death acted without any justification whatsoever, making selections at random.

In short, Death was unfair, and Death owned it.

And then, with no more warning than it had given when it entered his life, Death departed when the doctors told Owen that his cancer was in remission.

“You get to start your life all over again now,” his mother said.

“Think about how lucky that is, O,” his father said. “Most people would give anything for a second chance, and you have one, buddy.”

In the years that followed, Owen was surprised at how much he missed Death’s company. He was more than happy to forgo the chemo sickness, of course, and God knew he enjoyed having his hair back. But still he longed for that sense that, amid all the lies he encountered on a daily basis, someone close by was willing to speak the truth.

Of course, Owen knew that Death would return. It came for everyone, after all. It was only a matter of when.

And then, in the winter of Owen’s eighteenth year, Death came back into his life. Much to his surprise, however, Death bypassed him, coming for someone else. And Death’s modus operandi this time was not cancer, but homicide.

Sign up for Adam's Newsletter: Subscribe
We use cookies to ensure that we give you the best experience on our website. If you continue to use this site we will assume that you are happy with it.OK